This is my seventh quick craft, the challenge where I make something within one hour. This weeks quick craft was hit by a few hiccups including running out of materials, me resetting the stop clock by mistake and receiving a telephone call in the middle (I use my phone as the stop clock so I couldn’t stop it once I was on the phone). Anyway, I am still pleased with the outcome so I do not really mind that it all went a bit funny for the quick craft challenge.

This week I wanted to make some cushions for my dining chairs, I sit at the table for my sewing and for my study and the chairs can become uncomfortable when I am sat on them for a while. This is what my dining chairs look like:

I started of the quick craft this week as normal, by getting out all of the materials I would use and threading up my sewing machine. I used some patterned fabric, plain turquoise fabric, self cover buttons, black buttons and some washable stuffing (very important for this type of cushion as I am sure they’ll end up with food or wine on at some point). I then set the timer and got ready to start.

To start with I cut out the fabric that I would need. By ten minutes I had cut out all of the patterned fabric pieces (four circles for the self cover buttons and four squares the same size at the chair top with two adjacent curved corners) and all of the main panel pieces from the blue material, I had also cut out two of the strips for the ties meaning that I needed to cut out another six.

I then cut out the other six strips and then set to ironing the strips. I firstly folded the strip in half and pressed the seam. Next I opened it back out and folded the bottom and top edges into the middle crease and then pressed again. I then folded it in half again and then pressed, this meant that the raw edges were caught in the middle. At nearly twenty minutes I had ironed all of the eight strips.

I then used the sewing machine to sew down the edge of all of the strips. Then I laid out one of the patterned pieces right side up, laid to of the ties on top of it and then put a turquoise square on top of that (so right sides were all together). I then stitched around the edge leaving about a two inch gap for turning it back the right way out. At thirty minutes I had sewn all of the strips and done two and a half of the cushions:

Next I completed the sewing of the third cushion and the fourth cushion and then turned them all the right way out. I then started stuffing the cushions with the stuffing. At forty minutes I had managed to stuff one cushion but just as I was about to take the photograph I hit the reset but on the stop clock:

I then stuffed another two cushions which finished off the stuffing meaning that I was now down to completing three of the four today and that I would need to buy some more stuffing for the fourth. I then started to cover the buttons, just after fifty minutes I had stuffed the three cushions and covered on button: 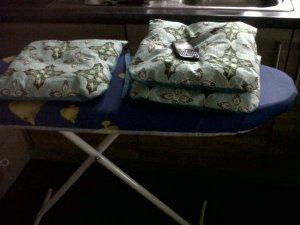 I continued to cover the buttons and then my phone rang in the middle and I spoke to S for a while, this meant I abandoned timing (quite handy really seems as it was already obvious that I could not possibly complete the cushions within the hour). After I finished speaking to S I finished covering the buttons and then attached them to the center of the cushion on the patterned side whilst at the same time attaching a black button to the plain side. I the decided to put more stuffing into the cushions, meaning that I had two cushions fully stuffed, one part stuffed and one without stuffing, I thought that it would be best to complete the two with plenty of stuffing and then work on the other two when I have brought more. All that was left was for me to slip stitch the gap that I had used to turn the cushion the right way out.

This is the cushion on one of the chairs:

This is the cushion on the chair from the top view:

This is how the dining table now looks:

I would estimate that the completed cushions too about one hour and twenty minutes which is well over the time for quick craft, but I am pleased with the finished cushions. I will get some more stuffing soon so that I can complete the other two, two are fine for now though seems as it is just S and I.