I wanted to make a changing mat that would form the flap closure of the bag but also be removable (with the plan that if she wanted she could take it off and put it into another bag rather than needing to buy another travelling mat). To start with I cut out the fabric: 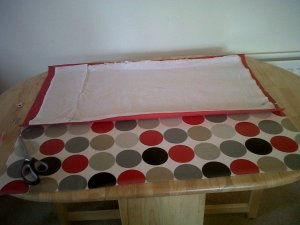 I cut out one red and one spotty rectangle (I got the measurements for these by measuring around the bag from the snap closures at the bottom and round to the magnetic closures. I then added ten centimeters on (mainly so I had something to play with), this meant that they measured 86cm long and 45cm wide. I also cut out some fleece this was 85cm long and 44cm wide. 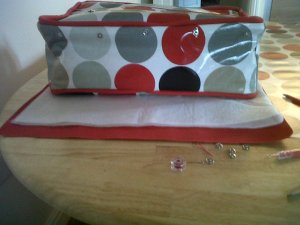 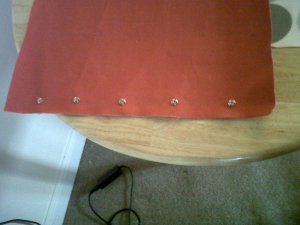 I then worked out the placement for the magnetic closures. I did this by attaching the red fabric to the bottom of the bag by the snap closures and wrapping the fabric around the bag 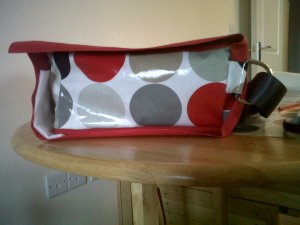 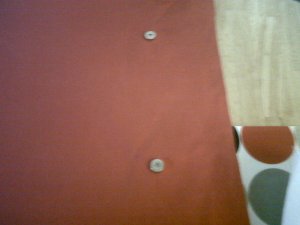 I then placed the red and spotty rectangles, right side together and then laid the fleece on top of the red rectangle. I sew around leaving a 1/2cm seam allowance and a gap along part of one of the long sides for turning it the right way out. I then clipped the corners and trimmed along the seam allowance quite close to the stitches because the fleece can add a lot of bulk if it is not trimmed. 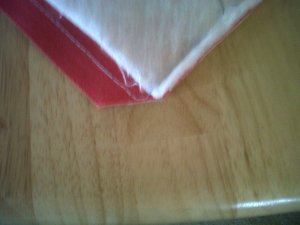 I then turned it the right way out through the gap that I left. This was really tricky because the oilcloth sort of sticks to itself. I ensured that the corners were fully turned out. 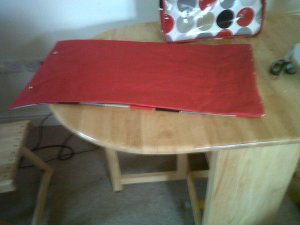 Finally I top stitched around the edge, ensuring that I enclosed the gap left for turning. I generally left a 1/2cm gap with the exception of the short edge with the snaps because I did not want to break my needle on the closures. 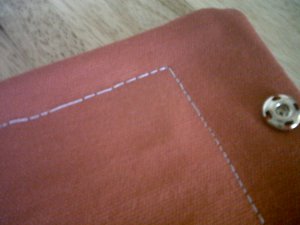 All that was left was to attached it to the bag. This is the bag with the changing mat attached but extended out 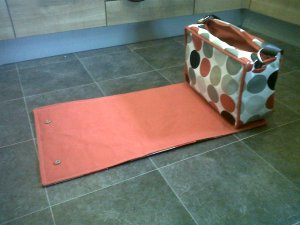 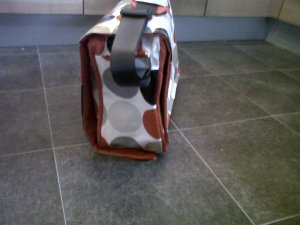 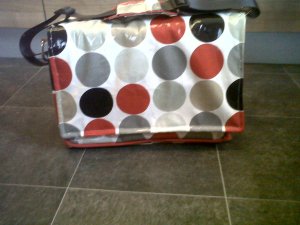 I am so pleased that I have managed to finish this for my friend and I couldn’t be happier with the finished results. This is the first bag that I have made that I designed myself (I have always used patterns before) and I would happily design and sew another bag. Hopefully it will be safe in the post and arrive to Hastings quickly for my friend and her new son.

I had originally planned to make my niece’s birthday gift today as part of quick craft, however part of the material has not arrived yet so it will have to wait until next week. I have therefore made myself a case for my glasses today. I started off by getting out all of my materials: cotton patterned material, blue felt, double sided fusible facing, extra firm interfacing, a button and my stop watch. I also threaded up my sewing machine with blue cotton and set the ironing board up. 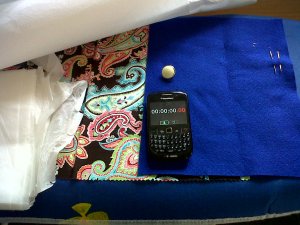 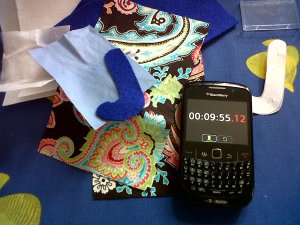 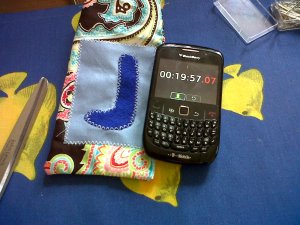 I then placed the two felt rectangles together and stitched around three edges (two long and one short). I then basted the extra firm interfacing onto the felt (wrong side). Next I placed the felt and the cotton right side together and stitched around the top edge, leaving a gap to turn it back the right way (this gap needed to be quite wide because the extra firm interfacing in not good at going through tight spaces). I then turned it back the right way around, tucking the felt lining into the cotton and ensured the that corners were turned out. I then pressed it flat (on the back because the felt would stick to the iron) and then top stitched around the top, closing the gap for turning as I went. This is how it was looking at thirty minutes. 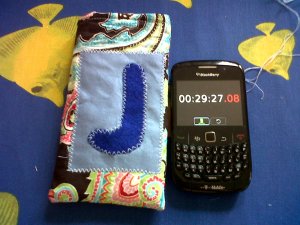 I then added a button hole to the center of the front top edge and sew a button on for closing. The case was then finished. 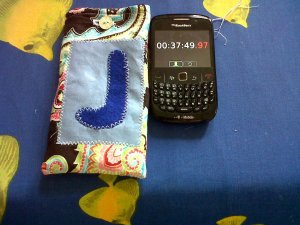 This was an unbelievably fast project taking just under thirty-eight minutes. I now have somewhere safe to keep my glasses and the extra firm interfacing in the project means that they will be protected in my handbag. This is the case with my glasses in 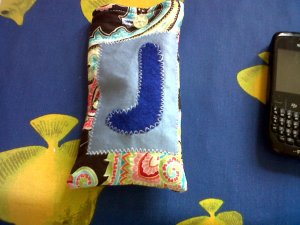 I then decided that I would make some cakes seems as I had more time left than I expected. 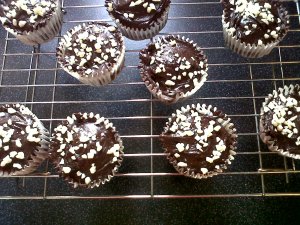 For next week’s quick craft my material for my niece’s birthday gift should have arrived.

Today I have been working on a whole variety of different things. It started off last night when I decided that I would make a start on the bathroom mat that I wanted to make. I got my idea from Small Stash by Amy Butler and Melissa Averinos, a great little book at has projects that only use a fat quarter. I started the bath mat at 20:00 and by 22:00 this was the result: 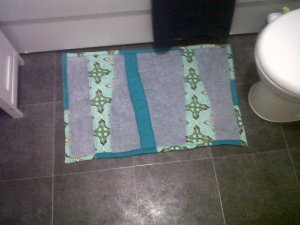 I’m very pleased with the outcome especially considering that it used an old towel with spots of hair dye on it and just some scraps of fabric. The project only took two hours and this included my sewing machine having a bit of a funny turn in the middle of the project!

When I got up today I decided that I would have a go at a couple of projects from another book that I was given for Christmas, 101 Great Ways to Sew a Metre by Rebbeca and Patricia Hoskins.  To start with I made a cover for my sewing machine and a wrist pin cushion, these took about 90 mins altogether which is very quick. The instructions in the book were very easy to follow, I was confused by the pin cushion but when I followed exactly what was written it all worked out. These are the finished products: 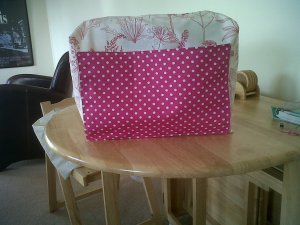 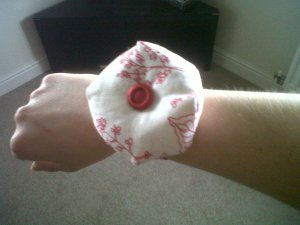 The machine cover has a handy pocket on the front for the plug and foot pedal, I am happy to finally throw away the ugly dust cover that came with the machine.

The next project I worked on was a cover for my filofax, this again is from the Sew a Metre book, this is the outcome: 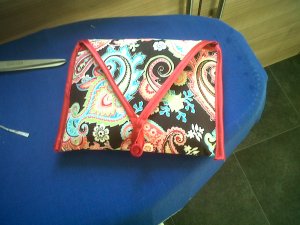 The cover means that I can pop the filofax into my handbag and find it out really easily. The cover probably took about an hour to make but I popped out in the middle to walk the dog. I would say that of the things I made today, this was probably the trickiest, I had to unpick the bias binding a couple of times, mainly due to my fussiness but now that it is finished I am really pleased with the results.

I would recommend the 101 Great Ways to Sew a Metre book, it is perfect for last minute gifts and also a great way to use up all of those left over bits of fabric from other projects (for example the filofax cover only used a fat quarter) or those fabrics that you just buy because they are so pretty. I also did a search on the author and she has another book out, I will be very tempted to get that one too.

I also made a cushion today, this is the finished cushion: 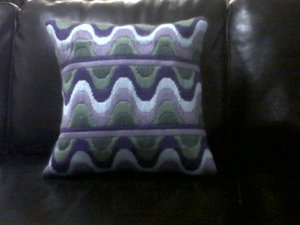 The front panel is long stitch and I did this quite a long time ago but it was just stored in a drawer waiting for me to buy a back for the cushion. Whilst out walking the dog I just thought about it and decided to make my own back. I will write up the tutorial for this shortly.